GRIMSBY has long been one of the most important Fish Docks in Europe, renowned for quality and diversity of its fish. It attracts fish supplies from both UK and continental ports and is one of Europe's premier fishing & fish processing centres. The port is in an ideal location, close to the mouth of the Humber and is the major port and market closest to the Midlands and South of England. 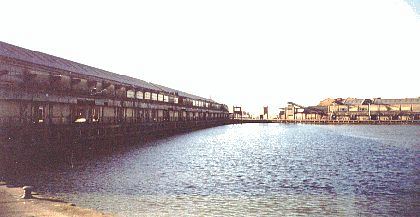 The Fish Port of Grimsby has a water area of 63 acres with a berthing length of 1 mile. Over 140 vessels operate out of the Port which is ideally situated for the fishing grounds of the North Sea.

A scene from Grimsby fish market.

The catch is landed.

The Grimsby Landing Company is responsible for the employment and allocation of labour to land fishing vessels in the port of Grimsby which cater for the small type sein net vessels from 18m in length up to the larger Deep Water Vessels of approximately 70m whether landing fresh bulk fish, boxed or frozen blocks. The experienced labour force normally commence work at midnight or at 21.00 hours on the larger voyages (i.e) 2,000 kit and upwards depending on the total quantity of fish to be landed that day. 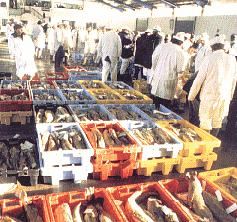 Forward information for the landing in Grimsby is normally required no later than 36 hours before landing commences in order for the total landing operation to be planned.

Smaller voyages which arrive without adequate notification are however often discharged provided labour is available.

The Grimsby Exchange Limited is a private company which is wholly owned by The Grimsby Fishing Vessel Owners Association, being the successor of the Great Grimsby Smack Owners' Association Limited incorporated in March 1978.

The "Exchange" as it is known is the central service company providing equipment and facilities for fishing vessel landings, i.e. plastic fish boxes for landing and auction sales display, baskets for offloading, mechanical landing equipment, e.g. ship to shore conveyors and sorting tables.

The development of Grimsby as a fishing port on the estuary of the River Humber began with the building of the fish dock in 1856 when the railway lines linking Grimsby with London and the Midlands were completed.

It contained a floating pontoon which rose and fell with the tide and at which the sailing trawlers of those days, known as smacks, landed their catches. There was also a fish market and a smoke house. In order to preserve the fish whilst at sea, a building was erected in 1858 for the storage of ice taken from neighbouring ponds in the winter. This proved to be insufficient for the growing industry, so ice was imported from Norway in sailing ships. Later an ice factory was built. 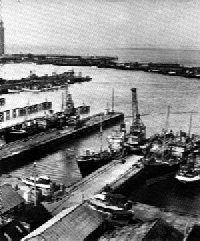 It could not be known for certain when sailing trawlers would return with their catches, so in the 1870's a scheme of fleeting was adopted, whereby fish from a group of vessels fishing together could be collected each day during the summer and taken direct to Billingsgate by steam carrier. As trawlers increased in size and power, they were able to explore more distant grounds and bring back more and cheaper fish for an expanding market. As a result, a second fish-dock was opened in Grimsby in 1886. Such growth called for the employment of many kinds of tradesmen to provide all the various services and equipment. For this reason, the Great Grimsby Coal and Tanning Company was formed. It grew to such magnitude that it had branches in many parts of the world.

(The Docks Today Above)

Because of the continued increase in the number and size of trawlers, congestion in the docks was frequent in the early years. A new fish-dock was therefore planned for 1912 but because of the war (1924-18), building was delayed and the dock was not completed until 1934. This brought the water area of the three fish-docks in Grimsby to 25 ha.